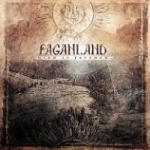 Pagan Metal. On one hand the term might find a lot of followers…on the other it just means hate from those thinking this is a joke created by drunken Metalheads in Europe while listening to some local Folk music in a old smelly pub. Many times it also means a band that a) has a connection with a Black Metal past / influences…or b) it is a Power Metal band trying to be “harder” by dressing as beggars did some 300 years ago… in both cases there is an inevitable relation with the uses of flutes / pipes / weird old European instruments AND clear voices sounding a bit rude. That pretty much defines Pagan Metal nowadays. Some might also say Folk Metal which might as well mean something similar. Whatever. PAGANLAND comes from the Ukraine. They do their Pagan Metal more in the a) with a Black Metal background. All of the lyrics are done in, I suppose, their native tongue. Musically, they are very competent in the way they play and production values are quite very good. I find their music quite more entertaining than the average “commercial” Pagan Metal band on big labels… as a matter of fact even my initial rejection to this kind of music, I find the album more “serious” than a couple of beer-drunken Metalheads trying to be on the old ages. There are enough fast parts and some “epic” sounding passages, to keep it interesting for those of us who refuse modern day Power Metal bands. In fact there is a very string Speed / Thrash Metal vibe here and there as well as melodic Death Metal touches, and the singing, mostly clean vocals with some added “growls” are actually working better than what I would imagine, still they would be better if they completely drop the growls and keep it more with the singing, which I must admit, done in their native language actually adds that charm that only those guttural words can create. Yes, there are keyboards, some of those old instruments here and there, and lots of melody, but not in the cheesy Power Metal vein some similar bands tend to abuse. The only band in a similar style I can relate would be OBTEST a band which I completely worship but always thought of them like a fantastic Speed / Thrash band with a Pagan touch. So, at the end we have an entertaining recording that fans of the style will surely worship. www.facebook.com/pages/paganland/413948075329819, www.svarga.eu