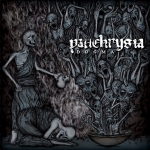 PANCHRYSIA spawned from the Belgian soil and has been operating heavily under the surface since 1998, during which time two demos, four studio albums and one shared release have been released. The Belgians emerged again from their underground caverns and their recent creation “Dogma” has seen the obscene light after full seven years of publishing "Massa Damnata" in 2011. Prestigious Satanath Records (Russia) this time took the charge of publishing this tale from the deepest depth of the underground. To characterize PANCHRYSIA’s music in a shell, we can talk about the modern version of classic Norwegian Black Metal. This is not a negation: it is basically a record that respects the Norwegian approach to Black Metal production in the early nineties but in a fresh approach, which can show newness while insisting on the original aesthetics of the founders of the style. The most powerful element of the "Dogma" record is the terribly dark, dismal, deep-seated and unstoppable atmosphere which transcends nothingness. From the sedative ‘Each Against All’ towards the calling of ‘Gilgamesh’ and the engrossing ‘Never To See The Light Again’ encapsulate the essence of gaining through absolute nothingness. In the contrary the last two creations ’28 Steps’ and ‘Rats’ are rather like surreal devastation until total purification. The lyrics speak about the human soul, its fall, and all the cranium of the modern age causing the fall, all of which is devoted to a mythical, on the one hand, and to an existentialist dress. The word dogma denotes all – mostly but not exclusively – religious axioms, which lock the present humans and prevents them from living on their own free will. The cover artwork is bereft of hope and joy, a scene of death and tortured spirits immolated by arcane energies. It proves to be a foreshadowing of the sensations spawned by this Belgian Black Metal band’s fifth album in a near twenty year career. If it were not completely contrary to the spirit of the early Norwegians, it’s evident that "Dogma" is a finely crafted and soulfully enchained Black Metal album with fascinating music ideas that do not lack brutality, but rather captured with pure emphasize upon melodies and atmosphere. There is spirit, energy and enchantment into it, but "Dogma" is more of a thought or emotion than acting on your instincts. All the soulful and open minded explorers of Black Metal Music should be exposed unto this record and face the states and adversity of their own dogma. Find out more about the band at www.facebook.com/panchrysia or visit their label: www.satanath.com