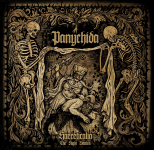 PANYCHIDA is a horde hailing from Plzeň in the Czech Republic and I sadly missed them out until now. They guys are active since 2004 already and with “Haereticalia – The Night Battles” they release their fourth full-length via Cursed Records. Their style can roughly be described as symphonic Pagan Black Metal or even Viking Metal. Normally this is not my cup of tea as I hardly can bear keyboards in Metal music and also the often overdone choral chants really annoy me mostly. PANYCHIDA’s style differs from that. First of all their keyboards are used very carefully even though always present in the back but they really fit into the whole picture. The second difference to classic Pagan Metal is that the band is more influenced by classic Black Metal and have kept the classic Black Metal caws as vocals which gives their music a fine Black Metal painting. Also the incorporation of old (Czech?) folklore is a nice alternative to the better known bands like ENSLAVED and reminds me a bit of old forgotten warriors MITHOTYN. The guitars are well played with some really nice and warm melodic lines and leads. The rhythm section is melodic but very powerful and the drumming with ever pounding double-bass in the background is also very rich in variety. Here and there the caws get varied by spoken passages or grunts or doubled vocals which keeps them interesting. PANYCHIDA really manage to catch the listener from the first minute and take him into the medieval times. My favourite track and a good taster for this album is ‘Josafat (The Gathering)’ which also can be checked on youtube. Really nice and memorable melodies and an outstanding track. Everyone into melodic Death / Black Metal or Pagan / Viking Metal should check this good output out. More info about the band can be found via the following sources: www.panychida.com, www.facebook.com/panychida, www.cursedrecords.at