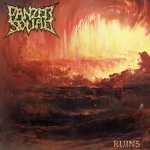 Another nice surprise is PANZER SQUAD from Germany. Unknown to me so far they caught my attention when Testimony Records announced the release of their second opus "Ruins". So I was pretty curious to hear what Testimony has digged out this time. After a spoken sample, the opener ‘Extinction’ really hits the listener in his ugly face. Pure and raw Death / Thrash Metal at its finest.The guys really know how to kick some serious ass. I can’t help myself thinking of mighty MERCILESS, a band I really adore. PANZER SQUAD really manage to capture the same raw vibe and they enrich their raw and ugly bastard with really nice and melodic guitar tunes similar to the ones MERCILESS offered on my favourite "Unbound". The drummer hits his kit like he wants to go straight to hell with it while the harsh vocals are really raw and hateful and the guitar work is pretty damn cool. But the guys can not only convince with speed. ‘Escapist’ starts midtempo and could even be a Melo-Death track before they stop in the middle and speed up again. The songwriting, somewhere between KREATOR, SODOM and the mentioned Death Metal influenced Thrash bands like MERCILESS, is really matured and on a pretty high creative level. The slight incorporated Death Metal nuances are really enjoyable as well as the occasionally used Speed Metal guitars. I also really enjoy to have another album with ever present and audible bass-lines. The twelve tracks really sound fresh and unused without following any trends and simply convince with skilled songwriting. The album has now spinned a couple of times in my player and the German guys really show where the frogs have their ugly curls. Enriched by a cover tune of SHITLICKERS and a quite fine cover artwork I hope the guys get a bit more attention what shouldn’t be a problem with the support of Testimony Records. I will now stop here, empty my six-pack of beer cans, put on my Metal cowl and try to get some dirty, drunk sex. Do the same or if not, check the guys out via one of the following sources: www.facebook.com/panzersquadthrash, www.facebook.com/testimonyrecords