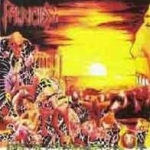 It is sometimes unbelievable to witness how much some bands become trendy thanks to a good promotional campaign. Add to this loud and controversial statements and the success is assured for otherwise run of the mill artists. Meanwhile, not so fortunate musicians reach the border of excellence without being noticed at all. I bet the name PARRICIDE means nothing to you and yet, this band could be considered as one of the best Death Metal outfits in the whole world. OK, they come from Poland and not from Florida, that can explain their anonymity and they are plagued by a fucked up distribution; mind you, their first full length ("Crude") was issued on the Japanese label Jackhammer in 2000 and contains material dating back as far as 1996-1997, while "Illtreat" was issued first on a microscopic Polish label before getting a more decent exposure through the ambitious Empire Records organization. The paradox is that after a long quest I finally found the first version which is discussed about here. "Illtreat" is nothing else than a lethal dose of devilish and extremely brutal technical Death Metal, the way Death Metal should ever be. The song structures are twisted to the point of ultimate craziness but at any moment the sound remains clear and pure without getting muddy. PARRICIDE combines the technical mastery of CANNIBAL CORSPE and the ferocious attack of DIABOLIC for example, but they transcend the style of their American counterparts to reach their own creative way of killing. You can’t feel but enthusiasm just letting you engulfed by this violent and unrelenting assault on your mind. The guitar work on display here is phenomenal, without talking about the insane drumming and the raw vocal delivery (guttural growls intertwined with shrieks), the final result coming out as a fantastic work. "Crude" was already excellent (except for the weaker production but hey, only the compositions are important in my opinion) but "Illtreat" comes out even better. PARRICIDE belongs to the legion of incredible Polish bands nobody seems to care about (DAMNATION, LOST SOUL, DAMNABLE, NOMAD, BETRAYER, DARK LEGION etc.) and believe me, they crush the established and trendy acts with ease. Don’t say "Erik this" or "Trey that" because it is time for you to wake up and dig out class acts who try to offer the best music they can if you consider yourselves a Death Metal worshipper. Don’t get intoxicated by glossy paper magazine written for pubescent people by mercenary "journalists", and make the effort to look out for something else, to begin with this PARRICIDE album. Oh, did I say they butcher the CANNIBAL CORPSE classic ‘Hammer Smashed Face’ with a touch of genius? You see, another reason to buy this, or die. Contact: parricide@poczta.onet.pl and check also the Empire Records web site for further info.