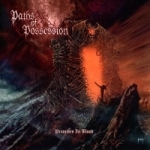 PATHS OF POSSESSION as far as their bio depicts was the brainchild of Richard Brunelle (ex – MORBID ANGEL) and some other guys interested to put together a band with a style quite challenging and never heard before. The aim was and still is, blend elements of old styled Heavy Metal with Swedish melodic Death Metal. This surely sounds odd for some and I must confess that I used to be part of those disbelievers up to the very last moment, before laying my hands on the “Promises In Blood” album. Also knowing in advance that George “Corpsgrinder” Fischer of CANNIBAL CORPSE fame would be part of the fold was definitely a plus for me. They indeed have blended the heavy, melodic, thrashy and sometimes groovy moods of Metal in a one and only slab of pure headbanging!!! But please don’t get me wrong, there is no breakneck speed or blastbeats, most of the material is hardly above mid-tempo (the title track has some serious beating though) but still is viciously heavy and extremely well performed by Mr Corpsegrinder & Co. The album was recorded at Mana Recording Studios, with Erik Rutan behind the desk so you can expect a massive, crystal clear and punching vibe. Picking fave songs from this release are a rather diffcult task since I love it in its entirety. It’s a fact that Metal Blade has done one of their wisest moves ever signing this interesting band. The future looks bright for PATHS OF POSSESSION, I cannot stop hailing this cool album althogether with the newest BOLT THROWER but that is another story. Visit the band’s website at: www.pathsofpossession.com or the label at: www.metalblade.com.