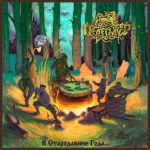 The Russian eight piece PEREPLUT from the city of Tomsk in Western Siberia is a band for those of you who really like their Metal not that heavy. Of course there is a guitar, there’s bass and drums and a Metal singer, but there’s also a violin, a cello and two flutes in the line-up of the band. And in some songs they use instruments like mandoline, tin whistle or a hurdy gurdy as well. This all screams Pagan Metal! And Folk Metal! Of course this is exactly what you get on “At The Ancient Times” (or: “В стародавние года…”), the first full length of PEREPLUT (originally: ПЕРЕПЛУТ) after an EP and a digital single. Listening to the album, I came very soon to the conclusion that PEREPLUT want to be like SKYCLAD, but are far from the quality of this once ground breaking English band. Unlike them, the Russian outfit doesn’t manage a combination of Folk and Metal, but sound fluffy. The melody lines on medieval instruments always sound a little put on in combination with the pretty modern Metal base of the songs. Somehow, it more reminds me of those ragged looking bands who jump around at the stages of Medieval meetings. Except for the two (too long) instrumental tunes who serve as in- and outro, the whole album passes me by without leaving any impact worth mentioning. The only emotion “At The Ancient Times” provokes is the sadness about the loss of old SKYCLAD. Pagan and Folk Metal enthusiasts might visit www.facebook.com/pereplutband or www.stygiancrypt.com