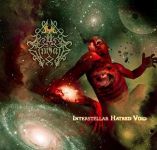 Here’s another Russian underground Black Metal act called PERVERSUS STIGMATA that had all the potential to make things happening for them, but unfortunately the band’s current status nowadays is ‘on hold’. They probably have split up for good already because it’s nearly been 5 years since the band’s debut album "Interstellar Hatred Void" was released on Russian More Hate Productions, in 2009 precisely. Symphonic Black Metal is something, in which PERVERSUS STIGMATA at least tried to make their grande home run on their debut album but in a way, succeeded at that partly only, I am afraid. It’s the keyboards that in my opinion seem to be out of place within the songs, at times not really fitting in – and only giving sort of a feel the keyboard player didn’t have much of a clue how she should get them played, so that they could be in balance with the rest of the instruments. In fact, I believe without the keys’ so dominating presence on "Interstellar Hatred Void", the album would have worked slightly better, just giving a better impact on the listeners. The other instruments do synchronize each other well though, creating a somewhat ear-pleasing wholeness as far as PERVERSUS STIGMATA’s mostly fast-paced Black Metal is concerned. Vocalist and guitarist Storm has also done a nice imitation from the voices of Vorph of SAMAEL and Taneli Jarva of SENTENCED (the "North From Here" era only) with his raspy and croaking vocal delivery on the record. Like I said already, there’s definitely lots of budding potential in PERVERSUS STIGMATA, so it’s kinda sad actually if the band’s debut album "Interstellar Hatred Void" was their swansong in the band’s history. Well, time shall obviously tell though… www.myspace.com/psodium, label: www.morehate.com