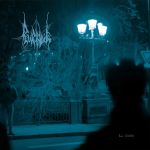 It wasn’t even a year ago that I would have been sure that anything released by the French label Les Acteurs De L’Ombre Productions will be at least a fine album for sure. But late last year PENSÉES NOCTURNES taught me better, as I definitely got no access to their music. And now it happened again with PEURBLEUE. But let’s start from scratch. It’s not really unusual for Black Metal bands to have one or two atmospheric interludes on their albums to calm down in between songs, sometimes also as a part of a song. I guess PEURBLEUE must have been pretty much impressed by those interludes and parts. And to put that idea further, they have decided to make a whole album with only interludes. There is no other explanation for what I heard on their first (at least I presume) album “La Cigüe”. Ten rather short musical pieces follow each other and over the whole running time of the album I wait for the songs to start. And then the album is over and I haven’t heard one real song. Maybe this extremely Dark Ambient stuff appeals to the one or other Black Metal listener here. But it didn’t appeal to me at all. Even listening to “La Cigüe” with my headphones didn’t help at all, to me this album is nothing else but boring. If you are audacious or very open minded, you might check www.facebook.com/peurbleue.official, if you’re not, you might still check out the label for fine Black Metal: www.facebook.com/ladloproductions