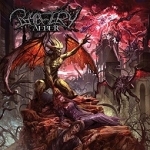 The name PHYLACTERY is pretty often used nowadays. Right now, there are three bands of this name around. Here we are talking about the Czech band that hails from Brno and just released their first full length album “Aeber”. The young five piece devoted themselves to Death Metal, played the brutal and pretty technical way. And PHYLACTERY don’t do too bad which implies that they aren’t doing too good either. From the first moment, “Aeber” is an average album that I heard in a similar way pretty often and better. The first two songs ‘Descent Into Madness’ and ‘The Contract’ passed me by without leaving any impression or remaining in mind. With ‘…Of August’, this changes, but not for the good, since this one has some annoying influences from those Deathcore or whatsoever bands. With ‘Diablo Code’, PHYLACTERY return to mediocrity and hardly ever leave. It’s just the guitar harmonies in the ‘The Grand Abomination’ and the bass intro of ‘Nightfall’ that made me sit up and take notice. On the other hand, there’s a real stinker called ‘Forest Eternal’ that sounds like modern IN FLAMES on valium. All in all, there’s some potential in the sound of PHYLACTERY, but “Aeber” doesn’t really show too much of it. Especially the excursions into modern sounds really ruin the good ideas. More info at: www.facebook.com/phylacteryband, www.supug.cz