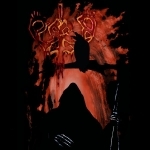 Emerging apparently out of nowhere – like the cathartic Yersinia Pestis pandemic, PLAGUE is a Bulgarian Black / Death / Thrash Metal project formed in 2016 by Catacombs (drums, vocals) and S.H (guitar, bass). “A Blaze Of Unholy Fire” is the debut demo recorded by PLAGUE in autumn of 2016 and released as limited edition 66 hand-numbered cassette tapes in co-operation with Terozin Mag & Tapes. At a later point in 2017, this demo was released on CD through Chaos Records (Mexico). The record has a playing time of about eleven minutes, contains three original songs (‘Of Black Sorcery’, ‘A Blaze of Unholy Fire’ and ‘The Wind Announces Death’) as well as a NIFELHEIM cover, which is ‘The Devastation’. Like carrying the plague from Bulgarian catacombs, PLAGUE spreads sickness by delivering infernal and shivering Black / Thrash worshipping great old cults NIFELHEIM, URN, SABBAT and AMON. Here they produced a sorcerous raw mix of Black and Thrash with Death Metal elements in the old vein, and the vicious NIFELHEIM cover showed their right-full conquest to recall the spirit of the early masters. PLAGUE wreaked obliteration like a wounding and black thrashing carnage initiated unholiest blaze fire. Wind that announces death finally transcends the plague with a gritty, intense and rigorous eruption of sonic mayhem. “A Blaze Of Unholy Fire” will surely batter your sanity throughout the playtime and establish their passages to enlighten the dark path and to spread the PLAGUE. Those who seek and explore such uncanny creations should grab this release and be plagued by their blaze fire effort. Check out the band here: www.facebook.com/plague.bulgaria and their label here: www.chaos-records.com, or visit their Bandcamp page: https://chaos-records.bandcamp.com