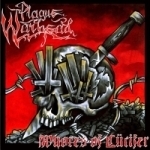 It’s always great to discover new bands from all over the world and when they come from one of my favourite Metal countries like Sweden, the better! PLAGUE WARHEAD emerged from the underground in 2008, but to be honest: I wasn’t really aware of them untill I got this little disc into my mailbox. It’s much more embarassing if I consider the fact that the line-up of this horde features members of some of my all time faves from Sweden like EDGE OF SANITY, PAN-THY-MONIUM or ALLEGIANCE (just to name a few). But better late than never. Something should be cleared first: don’t expect stuff like the above mentioned bands. This five piece delivers a solid and well executed blend of Death / Thrash Metal with slight blackend lyrical content. The four tracks on this EP are old school to the bone and you can really hear that the musicians are veterans in the scene. This skilled squad exactly knows what it wants and how the stuff has to sound like. Razor sharp, aggressive riffs played straight to the point with a lot of passion and attitude. The drums keep the pace mostly high and the pleasant brutal vocals are just the icing on the cake. Everything is very catchy and will make you play your air guitar right after the first track ‘Dominate’ sets in. In my opinion the production compliments the tracks very well and makes this lethal sonic attack blast quite powerful out of your speakers. Neither PLAGUE WARHEAD deliver something new nor "Whore Of Lücifer" will become an underground classic but the roughly 13 minutes make a lot of fun to listen and headbang to. Too bad the MCD, which comes as a nice fold out digipak, turned out that short as it is craving for more. In case you are interested or you would like to check out some sound samples get more info here: www.myspace.com/godeaterrecords or www.myspace.com/plaguewarhead (email: plaguewarhead@hotmail.com). Additional note: track two (‘Forces Of Evil’) and three (‘Blood Messiah’) aren’t correctly listed on the tracklist and got mixed up.