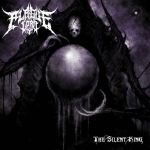 PLAGUELORD from Australia plays Death Metal to retell the essence and spirit of BOLT THROWER. But, it’s not just plain following, it’s to deliver menace and destruction in a slower and crushing way. “The Silent King” is their debut EP offering, which is a follow-up of their first and only demo “The Great Devourer” from 2019. And what’s more manifested in this follow-up is, the ravaging blend of old school GRAVE style with the damned BOTH THROWER mid-tempo school. The meaty guitar, dreadful vocals and doomy vibes may also remind of Sunlight style productions. As soon as this five tracks and 30 minutes EP starts off with an Orwellian speech (what corroded voice!), the atmosphere sets in for ‘The Lost And The Damned’ to begin. And from there, the pounding of strong drums and equally weighty riffs carry on, to give you a perception of post apocalyptic violence in a dystopian world. ‘Gathering Of The Tyrants’, ‘Hell Forge’ and ‘The Last Watch’, each one repeats and embody that atmosphere. And Maxwell’s rasping vocals express that brutality, without overdoing anything. All these should be enough for rotating the EP many times and follow the Aussies for their upcoming releases. Follow the band and label here: www.facebook.com/plaguelordau, www.facebook.com/ibdc666