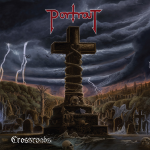 Three years after giving the world the brilliant "Crimen Laesae Majestatis Divinae" album, Swedish Heavy Metallers PORTRAIT are back with a new album entitled "Crossroads". Dark and spooky atmosphere? Awesome riffs? Amazing vocals? The old school spirit and the MERCYFUL FATE and KING DIAMOND echoes all around? Yes, it’s still there. From time to time Metal Blade release some bombastic old school Heavy Metal like in their early years, and as PORTRAIT are one of the coolest and best sounding bands from so called "New Wave Of Traditional Heavy Metal", it’s not really a big surprise they are working together. The production of "Crossroads" deserves a separate sentence or two: Necromorbus Studio (which is known from co-operation with bands such as WATAIN or DESTROYER 666 among others), where the band mixed and mastered both "Crossroads" and the previous album, seems to be one of the best places these days when it comes to classic sounding Metal. The album sounds clean, powerful, fresh and transparent, while it’s still old school to the bone. Is this release stronger than the previous PORTRAIT album? Hard to say, but one thing is is sure: all 8 songs that landed on this longplayer are really terrific, and should satisfy Heavy Metal fans that still worship the classic sound. Way to go PORTRAIT, great album! More information: www.facebook.com/portraitsweden, www.metalblade.com