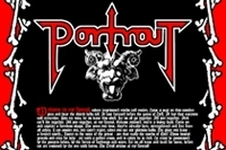 When I received this 3 song demo cassette by Swedish five-piece PORTRAIT, I immediately figured they would play raw Black Metal or at least something necro as NIFELHEIM for instance… Reasons for my assumption were the individual member shots inside the demo-cover that showcase a band that looks very Metal and old school with all the leather’n’spikes. But I was wrong and their name PORTRAIT should already have lead me in a different direction because within the Metal scene there’s only one association possible and that comes from the KING DIAMOND album "Fatal Portrait". And this is indeed a lot closer to what these guys are up to, even though they prefer to focus on Mr. Kim Bendix Petersen’s early days in MERCYFUL FATE quite heavily! The material on offer here is musically and atmosphere-wise rooted somewhere between the self-titled MERCYFUL FATE mini album (better known as "Nuns Have No Fun") and "Melissa". Classic Heavy Metal, with early MAIDEN influences in the guitar department (best reflected in track number two, ‘Black Hole Of Doom’) and vocals that are so close to early King Diamond that it’s really scary (just listen to ‘Prisoner Behind The Cosmic Walls’). Vocalist Philip Svennefelt mainly focuses on his midrange and only uses the high screams when a song requires it (just like Mr. Diamond did in his early days), but definitely does a killer job (same goes for the rest of the band as well of course)! The songstructures are not (yet) as complex as MERCYFUL FATE partly was, but who knows what the future will bring us, cause a 2 song 7" EP is already in the planning stage (for further details go here). Until then all MERCYFUL FATE worshippers and old school Metalheads are adviced to order the band’s debut demo. It sells for 5,-Euro (incl. shipping, worldwide). For more information head to: www.portrait.webb.se. Contact: portrait_metal@hotmail.com