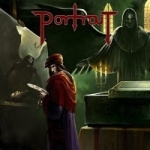 Could these guys be the new WOLF? Possibly, considering the hype that is surrounding them after just one demo and a 7″… Strangely enough after having watched their last year’s performance at the Keep It True festival, I couldn’t see what this hype was all about… decent Heavy Metal for sure, but nothing that was outstanding – in fact like the first WOLF album always has been to my ears. Now the debut album is here and while I still don’t go through the roof like a rocket after several listens, there’s definitely a good amount of potential here. But one thing is certain, while singer Philip Svennefelt tries very hard to be the next Kim ‘King Diamond’ Bendix, at the end of the day musically PORTRAIT does not have much in common with MERCYFUL FATE – although they’ve ‘borrowed’ a wellknown riff in the break of ‘A Thousand Nightmares’, haha! It’s undeniable that they use certain MERCYFUL FATE elements at time but their songwriting is primarily based on a main riff that is used throughout the whole song, they just add a few variations and well penned leads here and there. I’d say PORTRAIT sounds much more like IRON MAIDEN with hints of MERCYFUL FATE at times personally (totally agree here – Frank). Most of the material sounds pretty good, still at times there’s some tunes that get boring due to the lack of different riffs – ‘A Ghastly Silence’, ‘Consecration’ being some examples, the numbers sounding killer at first but are repeatitive in the end. This is something the band should work on especially with such ‘easy ‘n’ catchy’ melodies. There’s no fillers on this eight song album (although ‘The Adversary’ comes close and could have been easily included on a KING DIAMOND album!), that’s for sure and a strong point for PORTRAIT, definitely a kinda impressive debut album for a young band. Now they just have to perfect things and I’m pretty sure these five guys will deliver an incredible follow up. So far things look bright for them! www.ironkodex.de