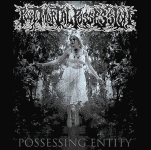 POST MORTAL POSSESSION is a Death Metal band from Pittsburgh, USA and they started their activities already in 2013. As all members have been involved in several projects before, they managed to release their first 5-track EP after only one year band history. The band plays brutal technical Death Metal with some influences of Metalcore or Hardcore. The opening track ‘The Harvest’ is a real riff monster, with blast beats and technical riffing, varying between slow motion Death Metal and a blast beat thunderstorm. The main riff is very memorable and this opener shows the whole quality of their material. Even Heavy Metal styled riffs can be found in this track, and this is a real exception in this sub-genre. Another highlight is the third track called ‘Deathmarch’, an old school Death Metal influenced slow motion wrecking ball, kicking some ass with really catchy riffs and a fine groove. ‘The Arrival’ comes up with a mixture of Death and Thrash Metal riffing and some influences of bands like DYING FETUS or even NECROPHAGIST, but in far more accessible way, than most of the technical Death Metal bands play. The final track ‘Visceral Butchery’ seems to be their own little hommage to mighty CANNIBAL CORPSE and could easily have been included on "Tomb Of The Mutilated". What needs to be mentioned as well are the perfect vocals on this EP, skipping between guttural grunts and shouts, so it never gets boring listening to their music. Also the production is fine and clear and very professional for a self-financed first release. Check the band out via: www.facebook.com/postmortalpossession and www.reverbnation.com/postmortalpossession666 or send a mail to the band direct via: postmortalpossession@gmail.com