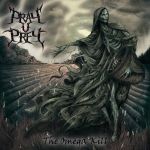 It might be that you never heard the name PRAY U PREY before, as this UK four piece only released a demo and an album so far. But maybe the name PROPHECY OF DOOM rings a bell, that had an album on Peaceville Records in the early days of the label and released some EPs and later another album for other companies before calling the quits in 1996. The two main members of PROPHECY OF DOOM, guitar player Shrub and singer Shrew, are active again since 2006 in ALEHAMMER and later they also started PRAY U PREY. Shrub switched to playing the bass guitar and the two teamed up with drummer Colin and guitar player Simon to record the releases mentioned in the beginning. And now they are back with a new album called “The Omega Kill”. Not aware of the previous outputs myself, I was quite curious about the current sound of these veterans. Expecting not that much, I was really blown away by this angry and raw outburst. PRAY U PREY come along with a very unpolished sounding mix of Death Metal and Crust Punk that displays the roots of Shrub and Shrew on the one hand and still sounds fresh and timeless on the other. This is the kind of music that never was en vogue and hopefully never will be. If you are still digging the old British acts of the time around 1990, when there were no real musical and ideological borders between Death Metal, Grindcore and Crust or Stenchcore, PRAY U PREY will surely be your cup of tea, as they captured the spirit of these days and carried it into the present times. Tough times need tough music and angry sounds – “The Omega Kill” is a great example for that. Sites to check out: www.facebook.com/prayuprey, www.facebook.com/selfmadegod