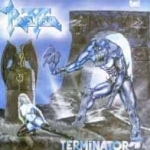 This is the kind of release on whose account I have strange feelings… Back then that whole new wave of so-called U.K. Speed Metal merchants (COBRA, BLOOD MONEY and PREYER) all got signed by Ebony Records and while having a look at the photos of the musicians, it’s clear that they looked much more like a joke than anything else. But after all INFERNÄL MÄJESTY also looked ridiculous in the early stages of their career, yet were delivering some relatively hot Metal. After having listened to that (nicely packaged, as usual with Marquee) re-release it’s clear that this band was definitively not a Speed Metal act unlike what the semi speedy opener ‘Reserve The Night’ would like to make one to believe, but a Heavy Metal act verging on Power Metal. Stuff like ‘Terminator’, ‘Leather And Chains’ or ‘Rock Crusader’ for example are numbers that are reminiscent of early STEELER (U.S.) or WITCH, just your basic Heavy Metal in other words. But at the same time the band was able to deliver some rather enjoyable uptempo material like ‘Over The Top’, ‘Beware The Night’ (this one could have been a classic METALLICA tune during the 80s with its powerful chorus) or the Power Metal frenzied ‘Riffarama’. Even the rockin’ ‘Shout Out’ is okay, a song very close to what MALTESE FALCON came up with, especially due to its similar singing delivery. There’s three bonus tracks to be found on here: ‘Raizin Metal’ being a good Power Metal tune – although the singing tends to be the low point on it while ‘Machine Gun’ and ‘Street Lethal’ sound very ordinary, the latter having a strong early WILD DOGS feel stamped over it. Not a bad album by any means but nothing transcendent either, more ordinary Metal I would say. www.marquee.com.br