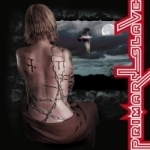 If there’s one thing Heavy Metal can be proud of it’s a dogged refusal among its truest believers to change, to always stick to a more or less agreed upon set of rules: no wimpiness, no sappy ballads, no whining vocals, no frills. It’s rather like living in a bubble, to put it unflatteringly. Every so often a band like PRIMARY SLAVE, coming from an entirely different music bubble, will try and encroach into Metal territory by adopting Metal’s looks, but failingly hilariously to measure up to everything else. This bouncing of the bubbles produces friction, mostly in the form of teeth gnashing by yours truly and anyone else who feels similarly. Hey, what can I say? I just don’t like this music and if you follow my rather inept bubble metaphor you’ll come to the same conclusion as I did: some things do not mix. In this case the mixture is Metal and 21st century commercial crybaby songs. PRIMARY SLAVE sounds like they belong on a crappy Hollywood action movie soundtrack with DISTURBED and SLIPKNOT. You know what I mean: loudness meant to belie the simplistic structure of the songs, vocals that make the singer seem like a pimpled teenage boy, and childish chords strummed over and over as if repetition will make the stuff interesting. Everything is geared towards making you forget how bad the whole thing really is. Listen at your own peril. www.primaryslave.com, www.myspace.com/primaryslave