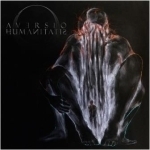 PRIMIGENIUM from Madrid was one of the first Black Metal bands to come from Spain as I learned now. They have released their first demo back in 1994 and after this another three full length albums. They now contribute their track ‘Gregarious’ to this split EP as a taster for their upcoming EP. Their style is classic old school Black Metal, influenced by the Norwegian hordes of the early 90s but far better produced without sounding wimpy or less cold. They manage very well to combine classic Black Metal with a proper production. The song is blood freezing and cold, with harsh vocals moving between caws and desperate screams. The drumming is fast and precise and somehow their music reminds me a bit of early EMPEROR without the use of keyboards but they manage to create a quite similar intense atmosphere. A very dark and menacing track that makes me curious to hear some more material of these guys and check their last album and the upcoming EP. AVERSIO HUMANITATIS contribute their song ‘The Ever Shifting Path’ to this split EP. This band was formed in 2010 also in Madrid and plays blackened Death Metal. After a full-length released on cassette format only and another split release, they show their current status and this is quite promising. The provided track is really powerful and dark and very well produced. It starts fast with pounding double-bass and fast but melodic guitars and vocals which are a mix of darker caws with some screams here and there but more in vein of Death Metal bands. The drumming is precise and the guitars very dark but still melodic. A really melodic and dark track, which seems to have its influences in the classic 90s Death- / Black Metal from Scandinavia, and a very cool melodic groovy last part. Absolutely recommended for fans of melodic Death- / Black. This release is another proof that split EPs really make sense and help to discover good bands. You can get this 7" EP via the bandcamp pages of both bands. More info can be found via their facebook pages: www.facebook.com/pages/primigenium/270299382981920, www.facebook.com/aversiohumanitatis or via the label’s page: www.blackseedprod.com.