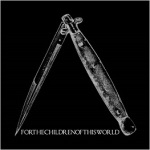 PRIMIGENIUM
For The Children Of This World
(BlackSeed Productions)
23:18min

Spanish pioneers of PRIMIGENIUM strike once again with a new EP released in late 2015, and as the title suggests, “For The Children Of This World” rises as another great piece in this legacy of cold-riffed and tormenting music we call Black Metal. There are only 4 songs, all starting with no ceremonial riffs and getting straight to their point: A pure, crude and unsettling music experience!!! It is a well-established band in the underground, true, but who would not notice the heavy influence of MAYHEM’s “The Mysteries Dom Sathanas” album in their sound, particularly the voices? Personally, this is the kind of reference I do not dread doing, but in fairness, it also doesn’t comprise much more than the core of PRIMIGENIUM’s art. The Spaniards have built up their music within the usual cold, grim and cutting riffs, mid to fast-paced drumming, and anguishing vocalisations, but they have managed to craft everything in a very concise way, adding bits of loose guitar arrangements, often in the odd tempos, played in a short loop, which help to reflect on the disrupting atmosphere of their music. They also escape from the traditional vein and present some interesting avant-garde passages, most fiercely on the song ‘Panic’, with rough transitions from the very slow to faster moments and the odd-tempo, looping riffs, consuming every vestige of peace around. This is definitely my favourite track in this album for it brings, up to a limited extent, the kind of distressing feeling that younger bands as Norwegian VIRUS and Swedish ELIMI provoke, and it just couldn’t be defined by a better title. Generally speaking, here’s an album that draws attention by its details, and every time you listen to it, you find something interesting here and there. More info at: www.facebook.com/pages/primigenium/270299382981920, http://primigenium.bandcamp.com, www.blackseedprod.com