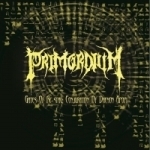 An EP can be a good way, for a band that have been away for a good while, to plow itself into the mind of the Metal scene again. I suppose the Brazilian Death Metal band PRIMORDIUM has been on a hiatus for a good while, as they released two demos in 2001 and 2002 and since then silence, until this very day when this release ended up in my hands. We are getting the title track for this release, a track from the upcoming album "Todtenbuch" and a medley of some older songs from their performance at this years Inferno Fest back in August. The Brazilians are delivering brutal Death Metal, a good mix of heavy and pounding rhythms to faster blasting parts. The band is inspired by Egyptian mythology, not something that is heard much through out the music, though it is haunting the lyrical sphere of PRIMORDIUM. I find the live track on this release the most interesting, it has the sheer brutality and intensity of a great live recording, were you can feel the energy of the crowd. The two new tracks are a bit to the dull side, the handy-work is as it should be be, nice riffing, good growls and precise drumming, though it’s yet two tracks of the mill, that doesn’t really stand out and make a lasting impression. The music isn’t bad at all, I’ve just heard Death Metal as this many times before, and some much more intense and straight to the bone, than what PRIMORDIUM is delivering on this release. www.facebook.com/Primordiumbr