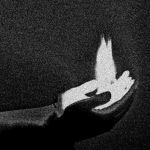 There’s something exciting about finding out a Black Metal band is from Finland. The chaotic, blasphemous insanity in the country’s style is, more often than not, quite compelling. So after discovering that one-man band PROFANE CONGREGATION hails from there, my interest was peaked. Their only full-length to date, “Apocalyptic Visions”, doesn’t necessarily have that Finnish Black Metal vibe we all are familiar with. Yet at the same time, you can feel the absorption of the genre’s Finnish influence in the music. It may be listed as a full-length (in its listing on Metal-Archives), but in actuality, “Apocalyptic Visions” is really only four songs and around 30 minutes. So maybe it sort of squeaks by as an album but not an EP. Who knows. Regardless, it begins with ‘Vicious Circle’, a somber opening of heartbeat-like percussion and eerie ambience. After a couple of minutes, the guitars and drums erupt in a foggy barrier of sound before morphing into a more recognizable form of Black Metal. The vocals are screechy, screaming, and almost sickly-sounding. It’s sort of a jumbled mess, but in a good way. The wail at the beginning of ‘Blinded’ catches your attention as the guitars plod along in a nice, steady mid-tempo track. ‘The Black Light’ is abundantly more upbeat in a lengthy track that blares in its energy. Sole member Sacrilege cries in a despairingly wicked squeal… like a farm animal being sodomized by the king of goats. The final, DSBM-style track ‘Soul Ascension’ showcases the atmosphere PROFANE CONGREGATION can produce. There’s almost a BURZUM like aura to it. “Apocalyptic Visions” is half an hour of dizzying Black Metal that gently guides you into its arms for its deathly embrace. One minor, minor, minor complaint is the guitars seem to have that surprisingly not-so-rare surfer-style guitar sound that Black Metal bands have from time to time that sort of pulls away from the overall genre. It’s hard to explain. But overall, the album, EP, or whatever the hell it is, melds into a trance-like state that is actually more enjoyable than you might expect. https://profanecongregation.bandcamp.com, www.morbidchapelrecords.com, https://morbidchapelrecords.bandcamp.com