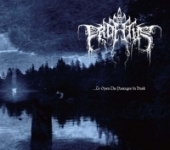 In my opinion it all started from THERGOTHON’s "Stream From The Heavens" in 1994; the band’s trendsetting debut and only album. The Finns had gone shamelessly against all trends, and done something very unique in terms of twisting Doom Metal into something even slower than seeing two snails in a reproduction rite. A horrifying term called Funeral Doom Metal was invented. Ever since many acts followed the same path that THERGOTHON basically created alone in the dark, trying to drop all the beats, riffs, etc. to minimum – and pushing the envelope of Doom Metal even harder by reaching that momentum within this genre when one makes a question whether the type of super-slow and ultra-depressive Doom Metal is going somewhere – and whether it’s alive and breathing as far as this particular genre’s ridiculously slow-motion song structures are concerned. The true disciples of THERGOTHON’s deep footsteps, a relatively new band PROFETUS – also hailing from Finland, play Funeral Doom Metal with such a ‘keep-it-preferably-still-than-slow’ style that some of us start looking around whether a pillow and blanket are needed at some point while spinning this disc. I mean, PROFETUS’ own approach in the world of Funeral Doom Metal, is crushingly oppressive, much heavier than your cheap Nokia rubber boots full of a salty sea water – and it has this tendency to make you sleepy. Yes, sleepy. You got that right… sleepy indeed. But then again, when this colossally slow tempo and yet also so unfortunate tedious record, "… To Open The Passages In Dusk", lets you in at some point, during those a few precious moments the album’s enjoyment level increases drastically. There’s indeed some great and clever stuff on this album that truly manages to feed your mind with quite a few levels of different emotions (mostly negative though). It’s just you have to find that right state and mood of mind, to actually enjoy this; otherwise the album will be nothing but absolutely a total failure to you, if you know what I am trying to say here. More about PROFETUS, can be found at: www.facebook.com/saturninedoom, label: www.weirdtruth.jp