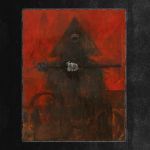 Finland has always delivered some solid Death Metal, though the least 10 years or so, there has been a shift in what we know as the classical Finnish Death Metal sound put on the map by bands like AMORPHIS, SENTENCED, ADRAMELECH where doomy gloomy darkness drenched the sound picture together with classic brutality. The darkness has not left the Finnish Death Metal scene, not by any means, it has actually become more dark as the years has gone by, though the gloominess has been replaced by utter brutality, brutality that drags you down in a pitchblack vortex, where the darkness is so menacing and massive, that you might never get back into sunlight again! PROSCRIPTION is a quite new entity, they formed in 2017, the same year they released their first demo – and fast forward to the blessed year 2020, where the band just have released their first full length album “Conduit”. The band is lead by Christbutcher, who you should know from his past ventures in EXCOMMUNION, MAVETH and CRYPTBORN, to mention a few. He is joined by among others Cruciatus, who I know best from LANTERN, though he is also a quite busy gentleman, so the band is not made of completely newcomers to the scene and dark Death Metal. It is always hard not to compare someone’s new band, to the older, especially when we speak of someone like Christbutcher, who has had such a big part of the sound and appearance of (most of) his former bands. It is quite easy to draw comparisons from EXCOMMUNION to MAVETH to PROCRIPTION. It has become darker and more brutal from band to band, more chaotic and drenched in mysticism. I was completely hooked when I first laid ears upon the debut “Superion” from EXCOMMUNION, though was flabbergasted when I first heard MAVETH, and didn’t think it could be taken further and greater. Though, now when we write October 2020, I have to say, it could be taken further, it could be taken darker, deeper, drenched deeper in dark mysticism, more raw and at last, even more brutal and more drawing, even harder not to succumb to! Chaotic Death Metal with a good splash of darkness to it, underneath the raw and quite low production there is a good deal of great guitar melodies going on, taming the chaotic darkness and brutality, though not so much, that the brutality loses its grip. The songwriting is gripping, yet pummeling, there are glimpses of beauty in darkness, though overall we get brutality, there is chaos, though never so much that music isn’t drawing and captivating, overall really good songwriting and good delivery of it! Perhaps the most brutal and complete album we will lay our ears upon this year! More info among gods in godly blaze: www.facebook.com/proscriptionhorde, www.darkdescentrecords.com