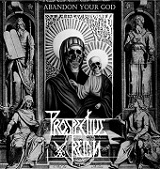 Combining Thrash and Death Metal was a step forward towards a more extreme direction in the evolution of making Thrash Metal sound heavier and more brutal, this started to happen in the underground Metal scene in the early 90s. Finland’s PROSPECTIVE REIGN have only been around since 2011, and without any prejudices the guys worked their asses off and got their 9-track debut album recorded during spring 2013. "Abandon Your God" is an amazingly mature wholeness from this group in that perspective how young the band still is. These young lads combine aggressive, straight-in-yer-face Thrash elements with brutality and heaviness of Death Metal if the description about their stuff could be put this way. In fact, if they had wanted, I believe some label would also have wanted to put this album out, instead of having this out as self-released by the band. One also needs to underline the fact how tight they play together, even the most technical parts getting bent surprisingly easily within this act. Growler Lauri Vietola’s vocal parts are full of angst and hate, definitely bringing a harsher element into PROSPECTIVE REIGN’s sound overall. So yeah, musically PROSPECTIVE REIGN kills like a one-eyed sniper – not a slightest doubt about that but if some negative criticism is also allowed here, somehow the band’s outcome is still a bit raw yet faceless, not really offering clear enough stand-out songs out from the pack. But still, with the amount of playing skills they possess in the band in 2013, we rightfully gotta assume the band’s next release is again a step forward in maturity of executing their material for larger masses. More about this Finnish Thrash / Death Metal squad, at www.facebook.com/prospectivereign