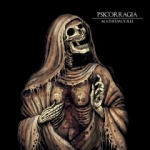 In spite of the year of formation, 1994, I’ve never heard about PSICORRAGIA from Lima, Perú. Surely they didn’t get a sharp hype for their first album "La Pasión De Lo Mortal", released in 2001. Between that one and the new full-length they have only produced two EPs, so I wonder if their songwriting is so slow and elaborate to take so much time or there are other reasons. Anyway, "Madremuerte" places this band in the mid 90s Doom / Death area, although they are far from the raw and filthy sound in the vein of CIANIDE, for example. They take their main influences from MY DYING BRIDE, early KATATONIA or OFFICIUM TRISTE, so a melancholic and agonizing aura pervades all the eight tracks of this platter. Apart these or other similarities, PSICORRAGIA have a wicker soul, a contrast of melodic, epic and dark tones continually repeats, where choirs and keyboards play an important role. Even if I usually dislike Death Metal bands with keyboards, I understand that here they produce an efficient dramatic outline. Their Doom style is not mostly based on slow riffs, in fact they also use fast beats and thrashy guitar solos. All these elements show us that this Peruvian act has his own identity, far from so many sheeps that only try to copy the trendy band of the day. Nonetheless, I have to say that there are also negative aspects that need to be improved: vocals are enough proper but never outstanding, some riffs are weak and redundant, and the whole album is a bit too long to avoid boredoom. Plus, I struggle to take too seriously the strong epic / mediaval approach of this kind of stuff, on and off I feel to listen a Doom / Death version of VIRGIN STEELE or the soundtrack from some horror / fantasy movie, an aspect that can also be pleasent for different ears. Get more information at www.facebook.com/pages/psicorragia/68860850241 or check their label at www.mfl-records.com