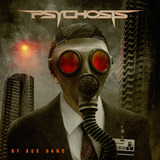 PSYCHOSIS
By Our Hand
(self-financed)
22:38min

Woah… something worth my attention and interest here again: PSYCHOSIS all the way from LA, California. PSYCHOSIS’ whole history dates back to 1988 when they were formed. PSYCHOSIS released their debut album "Lifeforce" in 1992, collecting a nice amount of positive reviews for themselves. Then, due to popularity of Grunge and a number of other reasons perhaps, PSYCHOSIS disappears from the map of LA Metal for many years, until activating its engine in 2006 again. PSYCHOSIS’ 3-track self-titled EP, having Bruce Hall (ex – AGENT STEEL) on vocals, was unleashed in 2010, which again seemed to create lots of fuss around the band. Now having heard these LA Thrashers’ 2nd 5-track EP titled "By Our Hand", that was unleashed at the very end of 2012, I can understand why they have seemed to become such a hot name among the Thrash Metal loving community. PSYCHOSIS’ Thrash is crunchy, heavy, beautifully catchy and it comes in from all open doors, causing us some serious addiction to hear more and more of them. No bullshitting, dear folks! I mean, if you have ever liked such bands as HEATHEN, EXODUS, HELSTAR and AGENT STEEL, nothing stops you liking this LA’s own PSYCHOSIS as well. In fact, one of PSYCHOSIS’ guitarists – a guy named Kragen Lum, also plays in HEATHEN, so probably he may be one of those primal reasons there why PSYCHOSIS may remind some people a bit of HEATHEN here and there as well. Not that drastically but a little bit anyway. What I really love in PSYCHOSIS, they play the kind of Thrash Metal style that combines some of the most integral elements of the Thrash Metal genre what makes Thrash Metal worth our times at the end of the day. They have got lotsa heaviness and aggressiveness in their sound, they have got some pro skills to play the style convincingly enough – and so have they clearly understood the true meaning of catchy melodies and spot-on solos (without any prolonged ‘I-wanna-be-a-guitar-hero’ wankery kind of shit) within their heavily slaying Thrash domination. What an awesome Thrash band PSYCHOSIS truly is; I simply cannot get enough of them. Find PSYCHOSIS at: www.psychosisthrash.com