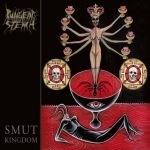 I haven’t heard about this album until it was announced that it would finally see the light of day in 2018. "Smut Kingdom" was recorded back in late 2006 / 2007. It is the last collaboration between Alex Wank (drums) and Martin Schirenc (guitars / vocals), the original duo that started it all back in 1988 until they split up for good in 2007. In this recording, bass duties were handled by Gregor Marboe. The album was kept in the vaults until both, Wank and Schirenc, agreed on finally releasing it, since Dissonance Productions re-issued most of the band’s recordings along a bunch of extra material (ie. soundboard recordings, rehearsals, rough mixes etc.) lent by the band. I mean, the first two PUNGENT STENCH albums are absolute classics and direct influences for me. I kinda hated "Club Mond Bizarre" when it came out. Both "comeback" albums, "Masters Of Moral…" and "Ampeauty" were quite different between each other and from the rest of their albums. But you cannot deny that PUNGENT STENCH was always looking for two things: one, to evolve as a band and two, new ways to upset the listener. And they certainly did this with "Smut Kingdom". I can’t tag this under any obvious genre or sub genre. This is PUNGENT STENCH doing what they do best: twisted Death Metal with tongue in cheek lyrics full of black humor, heavy rhythms and a lot of groove; all laced with a notable Stoner influence. Now, this kind of music was not "the thing" back in 2007. So, one can’t deny that the band was definitively evolving and doing their own thing. The album is a mix between sheer aggression and groove. Songs like ‘Aztec Holiday’, ‘Brute’ and ‘King Of Smut’ feature some tasty and memorable riffs that you can tap your foot to. On the other hand, ‘Opus Dei’, ‘I Require Death Sentence’ and ‘Me Gonzo’ are classic Death Metal and heavy as a ton of bricks. Now, you won’t find any blast beats or hyper fast parts here. There are some proto Thrash Metal patterns that sound similar to their "Dirty Rhymes…." EP with a bit of Punk and even some Hardcore sections. To top it off, the closer ‘Planet Of The Dead’ crosses over onto Doom Metal territory. The album has a lot of variation, but surprisingly everything is kept tight and balanced. The production is perfect: raw and crude. The mix is clear, maybe too clear for my taste but that is a minor detail when it comes down to the overall dense atmosphere that the band created. The guitar and bass tones are thick and saturated with an amazing organic feel and the drums sound natural and naughty. What they did with the mix (or re-mix) of "Smut Kingdom" is amazing because it has a notorious 90s vibe. It was really weird for me trying to pass this album as a Death Metal release. It has all the flags and the band delivers as they always did. But damn, PUNGENT STENCH has always been a band that surprises you with their best (or worst) stuff from album to album. I can assure you that some people will love this album and some other people will hate it because that is the main thing here: you either love it and enjoy it as a whole or you hate it with a passion. Again, PUNGENT STENCH was never your regular run of the mill band, so this kind of reactions are expected. And this album is proof of that. A testament to all things vile and upsetting. All boosted by the vision and music of one of the best Death Metal bands to grace this tiny and filthy planet. Contact and support the band here: www.facebook.com/pungentstench.official, get this album (I mean it, go get it now!) and most of the band’s discography from the label here: www.dissonanceproductions.co.uk