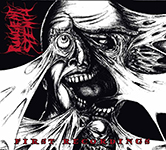 Founded in 1988 on the ashes of an obscure band called CARNAGE, the Austrian extreme Metal legend PUNGENT STENCH is without any doubt one of the most important and respected bands in the underground, both for Death Metal and for Grind fanatics. The british label Dissonance Productions, very active in releasing reissues of classic albums, decided to celebrate PUNGENT STENCH’s 30th anniversary with a massive reissue of a large part of their discography. A career retrospective that starts with a collection CD of their early works called “First Recordings”. This compilation goes over all the PUNGENT STENCH recordings from 1988 and 1989, including in detail: their six songs side from the split LP with their fellow countrymen DISHARMONIC ORCHESTRA, the two tracks sampler “The Pleasures Of Life”, the complete “Mucous Secretion” demo tape, the “Extreme Deformity” 7 EP and five live songs (one recorded in Poland and four from a gig in Vienna). A total of 20 tracks for more than 70 minutes of uncompromising old school Death / Grind with bloodsplattered and gory lyrics. The tracklist doesn’t follow a chronological order, but starts with the most important recording sessions and ends up with the live cuts. For sure the collection highlights are the songs taken from the split LP, the two tracks sampler and the 7” EP. These three recordings, despite their lo-fi origins, still have a killer sound and it’s easy to understand how the band found a deal with Nuclear Blast in 1990. The style of the Austrian trio is raw and sick Death Metal with distorted bass, abrasive guitars, crazy solos and a pretty dynamic drumming. Alexander Wank knows very well what to do behind the kit, offering us: single foot blast beats, double bass patterns, fast rollings, D-Beat and solid mid-tempo grooves. For what concerns the riffing style we have some slower doomish parts in the vein of AUTOPSY, mixed with a raw Death Metal approach à la BENEDICTION and GOREFEST, everything enriched by Grindcore accelerations similar to NAPALM DEATH, REPULSION, UNSEEN TERROR and TERRORIZER. The vocals of Martin Schirenk remind me of Lee Dorrian and Mark “Barney” Greenway from NAPALM DEATH, especially in the fast and furious Grind parts. There’s no doubt that PUNGENT STENCH were heavily inspired by the British Grind masters, as demonstrated by the fact that they recorded the “Extreme Deformity” 7” EP in England at the Birdsong Studios in Worcester, the same studio where NAPALM DEATH recorded and mixed their legendary album “From Enslavement To Obliteration”. Turning to the “Mucous Secretion” demo, it is a live rehearsal session recorded with cabinets, drums and a boombox. It was released on self copied tapes in 200 pieces. A rarity that holds some interest only for its gory and splattery atmosphere (the intro is taken from the movie “Evil Dead”). The same thing with the live sessions: very much a mere bonus for the hardest fans, although the cover song of ‘Strappado / Incinerator’ from the great but underrated Canadian band SLAUGHTER is very enjoyable. Overall, “First Recordings” is a great way of paying tribute to the early days of one of the world’s sickest bands. So, if you consider yourself an old school Death Metal and Grind maniac, get your copy here: www.dissonanceproductions.co.uk. More band information at: www.pungentstench.net or www.facebook.com/pungentstench.official