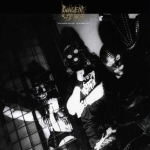 It is said that re-reading a book is like an old friend. And I guess this is the case with music and, in this case, with PUNGENT STENCH albums, and especially with this one. "Club Mondo Bizarre" certainly was an experimental album for its day and age, and the Austrian band dared to be different and try something… well, not “knew”, but different. For those of you not familiar with this band, PUNGENT STENCH was pushing the envelope of Death Metal along with their fellow countrymen DISHARMONIC ORCHESTRA (and later MIASMA did the same). Instead of doing the same old hack-and-slash Death Metal riffs and blasts over and over again, these three bands challenged their fanbase to try different flavors of music, and PUNGENT STENCH came up with the most groovy, doomy, catchy musical offering. If they had gone psychotronic on their previus EP, now they went the opposite direction: fully psychedelic. The album starts with ‘True Life’, with a groovy touch certainly appealing to the the growing fanbase Doom Metal bands such as CATHEDRAL and SAINT VITUS were getting in those days, whereas the following track sure challenges the average Death Metal listener, for ‘Klyster Boogie’ puts a 60s psychedelic twist to the sick lyrics… because Death Metal is more than smashed red-meat-gore-obssessed poetry. Humour is not lost at all in this demented ode to perversion, because “Bizarre” is the perfect description for songs such as ‘Hydrocephallus’ in which the band goes as groovy as it gets, or the swinging SABBATHesque riff driving ‘Choked Just For A Joke’. The “mad man on a killing spree” topic is addressed in the next song, and you can almost imagine Michael Douglas’s characer in the movie “Falling Down” pulling the trigger and shooting bullets at the beat of ‘I’m A Family Man’. The relentless slap bass gets a spot on ‘Treatments Of Pain’, a funky-inspired tune singing praises of untamed hate and revenge, preparing us to another merciless psychedelic attack… I bet PUNGENT STENCH were searching for the perfect song for this mixture of SABBATH meets CATHEDRAL meets depravity when they composed ‘In Search Of The Perfect Torture’ because this track, along with ‘Klyster Boogie’, encompass the whole vibe of this underrated album. And the doomy aura gets a deserved treatment both in ‘Fuck Bizarre’ and ‘Practice Suicide’. The last song shows that, lyrically speaking, they where ahead of its time. You girls reading this should really, I mean… REALLY take heed of the bands advise in ‘Pagar Con La Misma Moneda’ (Spanish for “pay with the same coin”)… “All the raped women should get their revenge / Kill those motherfuckers say PUNGENT STENCH.” The bonus material was quite a surprise. Instead of the original “karaoke tracks” included on the original CD release, we have a live gig recorded in Vienna back in 1993, giving the listener a chance to enjoy the band’s Death Metal material, with classic material from their first two albums. The band’s delivery is masterful and it is a great window to a past long lost and gone. All in all, take "Club Mondo Bizarre" for what it is, i.e. a testimony of a band in their most experimental stage, trying to find “their sound” and proving themselves as accomplished artists that never gave a fuck about what their followers could think of them, rather challenging them to new grounds. www.facebook.com/pungentstench.official, www.dissonanceproductions.co.uk