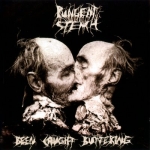 April is going to be a damn good month for me and it is all thanks to Dissonance Productions. The UK label has decided to reissue PUNGENT STENCH’s back catalog as well as an unreleased album and threw in some added bonus material as well. I thought with all the turmoil happening in the PUNGENT STENCH camp between the members in the last few years that we would never see their early albums to be released. Luckily I was wrong and am beyond ecstatic to get my hands on the vinyl and CD reissues as this band is on my top 10 list of favorites… the only thing missing is a DVD edition of “Video La Muerte”. Today’s review will focus on my favorite PUNGENT STENCH album “Been Caught Buttering”. The CD versions of these reissues will be in digipak format and "Been Caught Buttering" includes several live tracks from a show in Salzburg, Austria in May 1991. To me this album really showcased the band finding their sound and having fun. Porno Goregrind with a hint of dark humor is the best way to describe this album with thunderous drums, catchy guitar riffs and interesting guitar solos. From the start you get the homicidal anthem of ‘Shrunken & Mummified Bitch’ that lets you know what you are in for on the album and if you get a chance check out the video for this song on Youtube. Choice cuts on this album aside from the aforementioned ‘Shrunken & Mummified Bitch’ are: ‘Games Of Humiliation’, ‘Smash’, ‘Brainpan Blues’ and ‘Splatterday Night Fever’. Next up are the live tracks that are provided as bonus material. Live songs are a hit or miss type of situation. Depending on the sound guy and how the soundboard captured the music it can either be a nice addition or an abysmal failure and on this outing we lucked out as the music sounds very good. You can clearly hear the instruments, vocals and the crowd noise is not overshadowing the music. About half the material is off of their split with DISHARMONIC ORCHESTRA and the other half is material from their debut album “For God Your Soul… For Me Your Flesh”. In summary these long awaited reissues are welcomed as most of the early material of the band is hard to find and very pricey. The live tracks were a very nice touch and worth checking out. You can’t go wrong with any of the band’s material from their start up until 1994 (their reunion material is good but clearly not the apex of the band). For more info: www.facebook.com/pungentstench.official, www.dissonanceproductions.co.uk