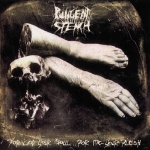 PUNGENT STENCH
For God Your Soul... For Me Your Flesh
(Dissonance Productions)
159:36min

This is the way someone does justice for a good album. Two versions, the one the original album as it was, and then another one that was re-mixed, re-mastered and had 3 songs re-recorded. Both versions were already available as separate entities and to be honest quite hard to get. We also get a few live tracks, but I am afraid just as a bonus and they not exactly add anything else to this album. So, what does PUNGENT STENCH play? To call it just Death Metal will be a wrong answer even if I admit it might be the one that fits most of the time. The band itself sounds A LOT like MASTER / DEATHSTRIKE and also has A LOT of early Hardcore / Punk but with always a heavy metallic touch. Of course this goes without saying that Thrash and Speed had a lot to do with the band. The guitar player is very weird at first, even if those are quite simple riffs. And the drums, oh my, they sound also strange and at times out of tune. Add to that a production that although it is heavy is a bit muddy and voila… you have a very good album! The final outcome is not far away from TERRORIZER and some early CARCASS but always with that Punk / Rock approach in their riffs. The vocals are also a good point in the band, as they are not just low growls but a quite good shouted raspy voice that reminds of a young Karl of BOLT THROWER… yes they have that Grind sound but that must be because of the DISCHARGE influence. This new version keeps the original art (which is always a good thing) and the fact that you get two times the same album but with some noticeable differences makes it the definitive edition. I have not heard this one in a time, and I also must be honest as this one is not aging as good as some contemporaries but yet more than once the riffs brought memories of a young Metalhead looking for newer and heavier sounds. It seems a vinyl version is also coming so keep an eye for that one too. This is a trip to nostalgia, and whilst more than one will use words of highest appreciation to this album telling you it is a masterpiece, which it is not, it is a good album and to have it available again is the way of the wise. www.facebook.com/pungentstench.official, www.dissonanceproductions.co.uk