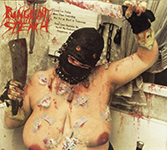 Formed in 1988, PUNGENT STENCH has long been celebrated in the Death Metal underground for their discourteous take on the world, featuring fucked up over-the-top lyrics and album covers. Let’s be honest. No one really liked this EP when it was released back in 1993. I am sure that most of us disliked the Death’n’Roll sound and totally hated the Techno remixes. Whether you find the cover versions of WARNING (‘Why Can The Bodies Fly’) and THE MENTORS (‘Four ‘F’ Club’) neat is a very individual thing. Personally, this EP disgusted me. The pitiful attempt to be freaky instead of delivering some sophisticated material has upset me. This disease of Death’n’Roll is one of the most music-damaging developments of our time and this EP is unfortunately a part of this disease. The two own tracks (‘Viva La Muerte’ and ‘Horny Little Piggy Bank’) on this release are unfortunately extremely mediocre and already pointed to the premature end of a once great band. It is really a sad story. As a small bonus to the original, there are five live recordings from the year 1992 recorded in Tel Aviv. It is really up to you if you want to spend your hard earned money on this reissue (and while we’re just in the right mood for some negative comments, all current PUNGENT STENCH re-releases on Dissonance Productions seem to be put together very sloppy! I’m glad the albums are finally available again, with their original sleeves and lots of bonus tracks. BUT: all of them come without booklets and the number of tracks printed on the sleeves often don’t even match the actual number of songs on the discs! And "First Recordings" even lacks info which sessions / releases have been combined on that disc, which is quite a shame! – Frank). More info at: www.facebook.com/pungentstench.official, www.dissonanceproductions.co.uk