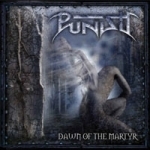 This is the second effort from this Swiss band, and it comes as a good surprise. While not exactly an original band, they deliver a powerful form of melodic Death Metal with a lot of Thrash Metal parts. The vocals are shared between two of the members, while one sounds like an angrier Mikael from DARK TRANQUILLITY, the other one is more of a common Death Metal growl. On a first listen this might sound like melodic Deathrash, which can also be mistaken by another Swedish Melodeath Metal clone ike DETONATION. But PUNISH are clever enough to have a quite different sound. In fact, some songs sounded to me with a distinct Brazilian Thrash Metal sound like in ‘Miss Anne Thrope’, which reminded me of SEPULTURA from the “Beneath The Remains” days. They achieved a great guitar sound that sometimes reminds me to their fellow country mates of CORONER. The band also adds some technical touches here and there, but not to the point where you get lost. While I have read that NECROPHAGIST might be a reference, I think PUNISH are not that technical and they are a bit slower, although some arrangements might sound similar in style. There are plenty of good guitar solos here and there, but still they retain a certain primitive flavor to it, by not becoming guitar heroes. Then again, some songs also reminded me of DESTRUCTION, but only from the “Release From Agony” era, as sometimes the way of composition is quite similar to that album. To say that also some songs remind of later era DEATH is quite certain, like in ‘Divinity Falls’, which suddenly turns into a sound more like the one found on the early DEICIDE records. I told you, this is not exactly an original band, but I find the way they mix all this influences and styles quite interesting, and they actually play it in a convincing way. At the end, I would like to hear a bit less melodic riffs and maybe if they keep things a bit more direct it will make a better impact. Some start-stop riffs sound a bit out of place, and of the two vocals, the more low growling one, sounds a bit generic at times. Still every time you listen to this album, you can find something new. Now it is time for them to get a sound of their own, I think they can create something more, if they just keep it more direct. You can find more info at www.punish.ch