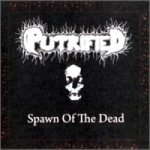 Doubtlessly there is something like a revival of old school Death Metal… and doubtlessly the quality of most of the new bands of that actual wave is pretty good. PUTRIFIED is just another of the countless new bands that hail the ancient gods. This Swedish band was totally unknown to me until Mr Stöver asked for this review. Okay, it isn’t really a band, PUTRIFIED is the one man commando of A.Death (who’s also playing drums for the Black Metal band INFUNERAL) and I’m really not a friend of one man bands. Sure, there might be a few exceptions but most of those "bands" are just a waste of time and a waste of raw material. Unfortunately we don’t have one of those exceptions here. "Spawn Of The Dead" is one of the least interesting albums I’ve heart in a long time. The songs are boring as hell. the sound is poor and not even as brutal and aggressive as a snail. And worst of all is the dilettante vocal performance. Man, the voice of Mr A.Death sounds really funny but definitely not brutal or good or anything else. I really don’t understand how a label can release such half-baked rubbish. Especially since there are so many awesome bands out there that really deserve label support. There are two cover songs on "Spawn Of The Dead" (at least I recognized only two), which are cruel adoptions of ‘Crucifixion’ (by HELLHAMMER) and ‘Zombie Ritual’ (by DEATH). "Spawn Of The Dead" is needless like a furuncle, so don’t waste your money.. Thumbs down. www.myspace.com/putrifiedswe, http://dybbukrecordsofficial.blogspot.com