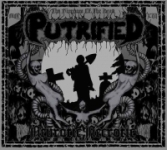 This is Death Metal from Sweden, but not the kind it is famous for. Some of you might be familiar with PUTRIFIED from their demo "The Return Of Swedish Old-School Death Metal" (2010), their EP "Whorehouse Tales" (2011) or their debut album "Spawn Of The Dead" (2011). "Neurotic Necrotic" doesn’t bring any major changes compared to "Spawn Of The Dead". Unfortunately, some might say. First of all, it sounds like it’s done tons of times before, but same goes for the majority of all releases reviewed here. Again this is very raw, but same goes for a lofi rehearsal tape from a few decades ago. It’s advertised as Necrotic Metal Of Death & Decay and I couldn’t refer to any Swedish band in this case. Maybe LOBOTOMY and very first HYPOCRISY, but that’s it. First blasting eruptions also remembered of the VADER demo days. To cut it short, it’s not really bad, it’s just slightly boring most of the times although in the speedy parts it sounded best. Since PUTRIFIED is a solo-project by A. Death, who’s also known as the drummer Casket of INFUNERAL, the question was whether this guy actually drummed here or used a machine to do the job. The raw production made it impossible to tell. Main points of irritation were the vocals which sounded like a mix of Jan-Chris de Koeijer & Chris Reifert and the keyboard effects in ‘The Land Of The Pharoes’. Lyrically, this is supposed to be a concept album, inspired by Herbert West – Reanimator and Under the Pyramids. But probably by now, you don’t care anymore. Too bad. For more info, check www.myspace.com/putrifiedswe, www.facebook.com/pages/Putrified/139314062811752, www.hellthrasher-distribution6.home.pl