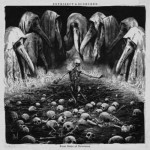 Unspeakable Axe Records from the United States once again proved its good taste in music with this actual split release. With such acts like TRENCHROT, UNREST and RIPPER on their roster, my expectations concerning "Final State Of Existence" were quite high and obviously I should not get disappointed. The first band to ring in the 20 minutes of Death Metal darkness are PUTRISECT from Baltimore. I just got to know about their existence, when I got my hands on that 3-way split single called "Pestilential Winds" Doomentia Records released right in time for their European tour with Death Metal veterans and heavy weights INTERMENT and FUNEBRARUM. Thanks to my drunken self, I missed out their performance at this year’s first edition of Netherlands Deathfest. So what we have here is another release with 3 brand new tunes, equal to that already promising track off that just mentioned tour split. After a short, but nonetheless weird intro, the marching route is quite clear. PUTRISECT offers straight forward, plain US Death Metal right in your face. Their very versatile playing and all in all song structures should at least please most people into this kind of dark and brutal musical art, since you get nearly everything your rotten heart is craving for. Whether it’s the blasting parts, the Thrash-laden riffing parts in ‘Final Cleansing’, the morbid melodies, the aggressive but every time understandable growls or even the speed ranging from doomier mid pace to up tempo. At some point bands like MORPHEUS DESCENDS or INCANTATION came to my mind, while listening to the three tracks over and over again, but PUTRISECT is a band standing out on its own, which doesn’t need any comparison with others. Indeed a short but intense appetizer that forces you to molest the repeat button on your CD player. Fingers crossed for a hopefully upcoming full length someday soon. Next in line, to contribute the remaining 3 tracks, is SCORCHED from Delaware. Unspeakable Axe has already been responsible for their 2015 demo and they will also contribute with a song to a 4 way split with GATECREEPER, HOMEWRECKER and OUTER HEAVEN soon to be released. Well, to be a bit picky, it’s only two real tracks, since ‘Impending Demise’ is just an annoying intro. But that’s not of greater importance. Furthermore SCORCHED is here to provide us with their interpretation of gloomy, guitar oriented Death Metal with a sort of Northern European vibe. ‘Lust For Strangulation’ starts off with some nice guitar leads and goes on changing from mid to up tempo rhythms and vice versa. Around 2:30min they surprisingly come up with that galloping DIVINE EVE groove I really adore, but, sad to say, after a few seconds it withers away, not to be heard again. The second track pretty much sums it up; in contrast to their partners in crime on "Final State Of Existence", SCORCHED is way more more sinister to me, not least because of the much deeper growls and the partly blackish, pummeling guitars. Even though both bands have a lot to offer and the potential and ability to capture the listener, I would choose PUTRISECT over SCORCHED. Period! At the end, some good news for all you vinyl junkies out there; Norwegian Edged Circle Productions will be handling the wax edition of this short but intense and worthy release. To the rest, please check their label at: www.unspeakableaxerecords.com and bother the bands at these links: www.facebook.com/putrisect and www.facebook.com/scorchedde.