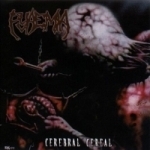 Ha! Got it! Finally! The Dutch sickos PYAEMIA had made a big impression on me at the Ear Terror Festival in Emden, Germany. Unfortunately they had run out of CDs so I was left in the rain that night. A couple of weeks later I finally found "Cerebral Cereal" at a DEW-SCENTED gig in Bremen at a very good vendor. You see: going out still pays off! "We dedicate this album to the gods of Deathgrind, SUFFOCATION – R.I.P." that’s what the booklet says. And somehow PYAEMIA manage to create a similarly dark and brutal atmosphere like their heros! Especially seeing this band live makes you realize their precision and the music simply makes you go crazy! I don’t think there ever will again be a band like SUFFOCATION, but as long as there are bands like PYAEMIA, the great loss doesn’t hurt as much. Contact the band whether they received their CDs in the meantime and watch out for their next tour! www.pyaemia.com