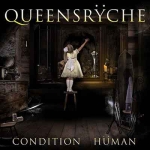 The QUEENSRŸCHE name related drama seems to be over, so we can finally again focus on what’s most important, the music. “Condition Human” is the second full length release of this legendary Washington based Prog / Power Metal act, which features the amazing Todd La Torre behind the microphone. It’s no secret that La Torre is one of the best singers in Heavy Metal right now, and also it’s no secret we all hoped for a new CRIMSON GLORY album on which he would sing, as he is one of the very few guys that ever walked the earth, who could match the amazing Midnight. Well, at least we could witness an amazing CRIMSON GLORY tour, before he left them to join the ‘RŸCHE, right? With keeping the band’s long history in mind, La Torre is still this “new guy” here, but to be honest, if we will compare “Condition Human” (as well as the previous studio album, the same titled one from 2013) to the last few albums that were made with Geoff Tate, there is more “classic QUEENSRŸCHE” here than on them, and while the music, production and basically everything is a little bit different, it sounds like… QUEENSRŸCHE. While the previous release was more like saying “hello, we are back”, and the band was probably checking what kind of feedback they can expect, “Condition Human” seems to be a much more serious, more complex album. We can basically feel that the guys learned how to work together, and realized they can do something amazing together, they are now a real band from flesh and bones. To answer your questions: no, it doesn’t sound like the ancient QUEENSRŸCHE from the “Queen Of The Reich” era. Could it be (musicially) “Operation Mindcrime 2”? Probably yes, too bad the guys released such album in 2006. Is this new album similar to the last few they did with Tate? Thankfully it’s not. So if you have no problem with the fact that the Tate era is over, and you like classic albums of the band, you will probably like this one as well. But it’s you who decide! More information: www.queensrycheofficial.com, www.facebook.com/queensrycheofficial and www.centurymedia.com