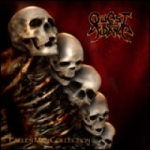 Emerging from the pits of Sweden, what can we expect of a band formed by members of acts such as Unmoored, Solar Dawn, Incapacity, Traumatized (SWE), Torchbearer or Scar Symmetry? Yes, you’re right, Death Metal in its purest form, with brutality, groovy riffs and melodic parts, great solos and aggressive growling vocals. Not too brutal, but with a good punch and not forgetting some original ideas, although standing in an old school style with Swedish and Danish reminiscences, and a touch of old Cannibal Corpse here and there. The production is raw but quite clear (although not too much, the guitars still sound crunchy) and songs are not bothering at all, which is not strange seeing that their average time is about one minute more or less. But there is the (possible) problem of this MCD (in fact this is the band’s first demo tape, "Human Trophy", re-released with a new packaging), its total playing time (only ten minutes), as it contains 6 songs plus an intro and a kind of intro / seven seconds song in the seventh track. But be sure this is worth a listen if you’re into intense Death Metal with really good riffing, drum blasting and non-stop brutality and I hadn’t listened to such an intense album for quite some time. About the lyrical part of it, these guys are into the Predator movies, which is quite unusual for the style. Quality is always better than quantity! www.pulverised.net