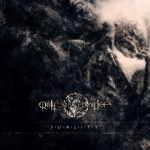 Symphonic Black Metal, with a heavy use of keyboards, and a reminiscence of DIMMU BORGR which is way too dangerous for its own health. And basically we can end this review here, but Frank will surely say something rude about it, so shall we continue the examination of this band? When a band sounds more symphonic than metallic, I am totally lost. This Ukrainian band is way more symphonic and orchestral, that sounds very good for some sort of film score, so the Black Metal parts seem useless, although I can appreciate they are well done. Still, the style which I am sure I have heard similar riffs / symphonic compositions of in the Norwegian band, and this is just another variation for those that want to listen to everything that might remind of Shagrath and company. And whereas DIMMU BORGIR has a slight satanic approach in the lyrical aspect, it seems here we deal with cosmos, Carl Sagan and Galactic entropy. An interesting fact is that if the Metal side was put away I would be praising this album more, as the orchestral / keyboard part is quite well done. And although I am afraid the drums are programmed, they did a good job there. Besides that, if you ever heard of symphonic Black Metal, this is just the same ol thing. www.schwarzdorn.de