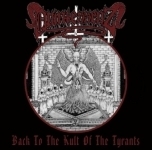 QUINTESSENZ
Back To The Kult Of The Tyrants
(Evil Spell Records / Undercover Records)
42:08min

Evil Spell Records…weird that by the name I already feel something good from this one man band from Germany. Evil Spell Records is a sub label for Undercover Records, a label known for quality Black Metal releases. And in this case we are not that far from a Black Metal approach, although this is more basic and primitive where early VENOM, CELTIC FROST and BATHORY are without a doubt the reigning influences. This even goes further as one can sense the MOTÖRHEAD and DISCHARGE sounds in there. So, we are here faced with probably the same album done well over 666 times by another 666 bands… and guess what? I never get tired of those bastards doing almost the same thing over and over again! So, the title of the album now makes more sense than ever, and a songtitle like the killer ‘Black Metal Holocaust’ must give you a sign of the devil to whereas this is for you or not. In fact, I think that this release is up there with some of the best copies of the aforementioned Black Metal purveyors, as the recording quality, the musical execution and overall performance is very good, especially when it comes to the drumming. The production recalls another similar piece of musical Black / Thrash as it does remind me a lot of NIFELHEIM’s "Envoy Of Lucifer”, besides the obvious similar musical approach, specially noticed in the song ‘Wings Of Blasphemy’. So, all of you fans of almost the same riffs, almost the same name songs, almost the same vokills, but exactly the same primordial evil attitude, you will definitely going to worship this one. Great release. www.facebook.com/grquintessenz, www.undercover-records.de