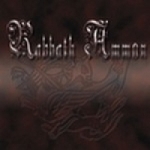 Before writing about the music a few lines concerning special circumstances. This band is from Jordan, a land where people are prosecuted by law and police when they play or just even listen to Metal. They get arrested and possible tortured and stay for years in prison or may never again appear. So the often heard call: "Metal is my life!" got a deeper and more serious sense in countries like Jordan or other countries ruled by military, dictators, priests. RABBATH AMMON (the name could be translated in "crown of sand" and refers to the ancient term for Jordan) consists of two brothers, who were active since 1993 in the local Metal scene with bands like HEBRON and RAPTURE IN HADES, but due to the above mentioned reasons they completely went underground now. On this demo they present us three songs plus one cover-version. Regarding the fact that this output was recorded at home, with more or less feeble equipment, the sound is quite amazing, it can match up with demo-recordings from Western Europe. The music arouses a great old school feeling, with more Death Metal based rhythms and song-structures combined with guitar riffs and melodies that sometimes remind of classic Heavy Metal. For me personally I always think of UNANIMATED, when listening to RABBATH AMMON, just to give you a hint. The vocals are somewhere between Black Metal shrieks and Death Metal growling, but never tip over in the one or other extreme. The cover version of ROTTING CHRIST’s ‘The Sign Of Evil Existence’ is nothing spectacular, but well done. I really like this demo, because it unites the rawness of Death Metal with the melodic element of ’80s Speed / Power Metal without loosing the ancient feeling. They say, much more material is waiting to be recorded, so hopefully we get the chance to hear that! Band contact: Rabbath-ammon@hotmail.com or ammonknights@yahoo.com