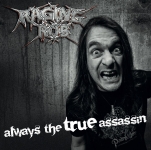 Who the hell is RAGING ROB? Well, RAGING ROB is the former ASSASSIN vocalist Robert Gonnella, who from 1983 to 1989 helped shaping the very best years of this band. In 2005, Robert relocated to Beijing / China and founded the band RAGING MOB, which was put on ice back in 2013. Just a year later RAGING ROB were founded back in Germany and strengthened with Frank Nellen (ex – ASSASSIN), Dirk Preylowski (WARRANT) and some HUMAN BASTARD members. With this pretty nice crew, Robert now wants to take the genre by storm. Well, what can you expect? RAGING ROB stands for earthy produced Thrash Metal, which sprays a wonderfully naive Punk vibe. In some way it’s a decent addition to the ASSASSIN discography, but probably only worth it for the hardest of Thrash enthusiasts. Regardless, the riffs are meaty, the bass is beefy, and “Always The True Assassin” is hung like a fucking horse. Every song is jam-packed with thrashtastic riffage that, though typical ’80s / ’90s material, crushes and pulverizes everything. Cool (besides nine own songs, the album also features two pretty cool re-recordings of the old ASSASSIN tracks ‘Fight’ and ‘Resolution 588’, as well as the AC/DC cover ‘Walk All Over You’… and yes, the album cover sucks completely indeed! – Frank). www.facebook.com/ragingrob1, https://ragingrob.bandcamp.com