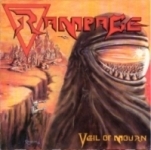 The original album from this Australian power trio was released by the Quasi Label (was this an inside joke or did a label with that name really exist?) in 1988. With a limited number of copies, this is one of those obscure Thrash Metal releases that, sincerely, I never heard of before. The Chinese Area Death Productions just re-released the album in a digibook format full of rare pictures, 7 unreleased tracks and bonus DVD. Oddly enough, "Veil Of Mourn" sounds like it was recorded pre-1985. It has a raw production full of big drums, screechy guitars and a somewhat audible bass. This overall sound just adds a very honest attitude to the music. The mix is a tad off-set in my humble opinion. Imagine DARK ANGEL’s "We Have Arrived". The vocals are similar to same era VENOM or SLAYER, including the high pitched screams, aggressive grunts and actual singing that is surprisingly good. The whole atmosphere is dark and twisted in a sense. It is Thrash Metal, with early WATCHTOWER and SACRILEGE BC influences; dare I say progressive at times? Also, two of RAMPAGE’s members were also in HOBBS’ ANGEL OF DEATH. From asking around, I discovered the original vinyl version is a rare collector’s item. One wonders why, because at the time, RAMPAGE didn’t have anything new to offer to the genre. This album could be a nice addition to all Thrash Metal collectors, due to the history factor behind it and the twisted type of music they were playing. Nothing more, nothing less. More info here: www.adp.areadeath.net