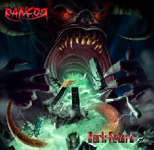 Besides delivering some blistering records, the Bay Area Thrashers from TESTAMENT have left a legacy behind that a good deal of bands are trying to live up to. I was quite surprised when I stumbled across a Spanish band a good while ago, that delivered a good blast in form of the album "Release The Rancor", which is a good study in nostalgic Bay Area madness performed in a modern and intense manner, without putting the old legends to shame. We have now moved a couple of years up in time and the Spaniards are ready with their second full length attack "Dark Future", and the future is indeed dark. I haven’t apparently matured since I first laid ears upon RANCOR’s music, and RANCOR has, that’s damned. They are still blasting Bay Area Thrash, though the expression is a bit more mature and nuanced. It’s not all bad, it just takes a couple of spins to get into the madhouse this time around. Something I really like is the incorporation of 80s Crossover styled vocals and direct riffing, blending in and out of melodic twists and straight on thrashing. The lads have become quite good at the songwriting part and deliver some nice tunes that makes your head ‘bang and brings back that old smirky smile, we all had once, while thrashing along to the classics. RANCOR delivers a nostalgic trip down memory lane in a good and intense manner, without it being dusty or ripping any off, there are some well put homages to different of the old gods, which I think would be proud of the connection to Thrashers as these. It’s been a while since I have been put in a Thrash trance, like with the two records this band has put out so far, while speaking of newer releases that is. Nothing will ever beat the past, though some releases get close to competing! Get into pit for sweet revenge or to escape from within: www.rancor.es, www.facebook.com/pages/rancor/49761554087?fref=ts, www.xtreemmusic.com