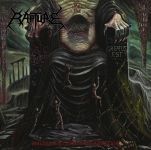 The Greek RAPTURE are already around for quite a while now, yet their newest album “Malevolent Demise Incarnation” is the first I got to hear from them. In the nearly ten years of their existence, the four-piece released two albums plus some EPs and demo recordings for different smaller labels. With their new album, they found a home at German F.D.A. Records, which in my eyes usually is a good sign, as Rico has a fine taste in music and an eye for promising bands. This also goes for RAPTURE. “Malevolent Demise Incarnation” is a really fine massacre that always keeps a fine balance between Death and Thrash Metal. I can hardly deny that I really dig stuff like that. Especially when Death Thrash is played with style and finesse. And RAPTURE do it with style and finesse! The whole album appears to me like a ride through the history of Thrash Metal, played in Death Metal style. You can hear hints on bands like FORBIDDEN, (not too) early VOIVOD, DARK ANGEL or KREATOR as well as some Black Metal harmonies and US Death Metal riffs. Thus “Malevolent Demise Incarnation” never becomes boring and is a joy to listen to over and over again. Those of you who like bands like DEMOLITION HAMMER, SOLSTICE or MERCILESS and love old fashioned Thrash Metal as well are highly recommended to check out RAPTURE. You won’t be sorry! But you will have great pleasure listening to songs like the title track, ‘Inanimate Frigidity’ or ‘I Am Become Death’ (sic!), to name just a few listening suggestions. Visit the band at www.facebook.com/thrashrapture and the label at www.fda-records.com