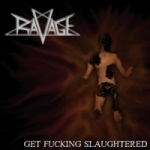 Düsseldorf based Thrashers RAVAGE are back with their second strike. The new outbreak is entitled “Get Fucking Slaughtered” which is a high explosive mix of merciless Thrash Metal and some lethal Death Metal parts (and it totally kicks ass). Mostly this apocalyptic squad plays as swift as an arrow and the tracks have the same effect than someone hitting you with an axe: cranium splitting. The idols of this quintet are cited more than once and it’s an open secret who are the main influence of them: SLAYER. Sometimes you really have the feeling that this legendary act plays here. You will get excellent doublebass parts in the slower and midpaced sections which are totally crushing. The riffs are aggressive, razorsharp and straight to the point. Of course the insane leads aren’t missing here as well. That’s how Thrash must sound like! The vocals are aggressive and raw and really often offer a Death Metal like performance. The production puts the tracks in perspective and this traditional based sound sets free a lot of power and energy. Thrash Metal lunatics should check out tunes like ‘Get Fucking Slaughtered’, ‘Havoc Command’, ‘Nuclear Storm’, ‘Into Your Demise’ or the re-recorded version of ‘Bloody Revenge’ which are all new food for your home stereo. So put on your bullet belt, open some beers and ‘Thrash Till Death’. www.totalravage.de